Avil Ela Ada is a traditional Kerala Sweet delicacy recipe. This is usually prepared during festivals and even served as an evening snack or part of breakfast menu.

Ela Ada is an easy recipe recipe to make which needs only minimal ingredients to make. Usually Ela Ada is prepared with only coconut and jaggery as the filling. But Avil (Beaten rice) or Banana is also added to increase the richness of this snack recipe. Avil Ela Ada with small bite of grated coconut and crunchiness of Avil is a real hero among the variants of Ela Ada.

Ela Ada is very common among Kerala and even among peoples in come part of Tamil Nadu. Tamil Nadu’s Turmeric leaf Ada and North India’s Modak is similar to the Ela Ada.

Ela Ada is prepared by wrapping rice dough filled with coconut filling and is wrapped in banana leaf. This is steamed and enjoyed with a hot cup of tea or coffee often. Jackfruit Ada is also prepared in the same way but the difference is instead of banana leaf, bay leaves are used commonly for this dish.

As banana leaf and Coconut is very easily available in Kerala, this is a quick and easy recipe to make. I forgot to mention about one thing. This dish is an healthy piece is delight as it has got no sugar and the is steamed as it calls for no oil.

Also do check out another version of Kerala traditional Jackfruit Ada Recipe: 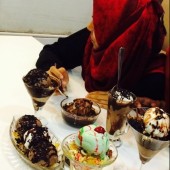 Chartered Accountant by Profession but an emerging Chef by passion. It was the thought of doing something not related to my profession to take a break every day, lead my way to the kitchen for the first time. I always love trying new food which made it very easy. Now from trying out new food to experimenting new recipes, I am growing everyday.So here I am with the recipes I tried and succeeded.

This site uses Akismet to reduce spam. Learn how your comment data is processed.

So finally the results of our contest *”Flavours of Ramdan”* are here. We got our winner recipe and we are extremely happy to announce our winner. Flavours of ramadan contest was started on 5th May 2018 and we received 100+ recipe entries, It was a tidious task for us to select the top 6 recipes, each and every recipe was good and our admin panel selected 6 recipes based on content, presentation and food photography. These 6 recipes were set for public voting via facebook and instagram for 15 days. And the days of excitement are finally came to an end. Thank you for all who voted for our contestants and thanks for all the support. We expect this support and encouragement through out our tasty experiment journey. Thank you!